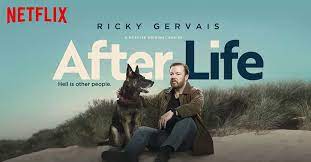 After Life is a British black comedy-drama streaming television series created, written, produced and directed by Ricky Gervais, who is also the star. It premiered on 8 March 2019 on Netflix. The second series premiered on 24 April 2020. On 6 May 2020, Netflix and Gervais reached a new multi-project deal which included the renewal of After Life for a third series.