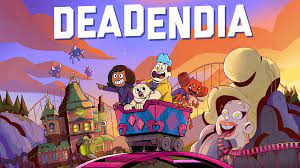 DeadEndia is an upcoming animated fantasy horror comedy television series created by Hamish Steele, which is based on the graphic novels of the same name by Steele and Cartoon Hangover’s Too Cool! Cartoons web short Dead End.

The series is scheduled for a fall 2021 premiere on Netflix.